This post meant to be a (very) brief primer on oikos mapping. Okies mapping is a tool that has completely changed the way we ordinary Christians do ministry, relationships, and live our lives. We are excited to be able to pass this on to others who can use it. These slides accompany a presentation I will be giving at Living Well in Dixon during small group time (September 20th, 2015). I wanted to include it here for those who hear it can review the example when making their own, and for the benefit of any of our online participants of small group to be able to follow along at home.

What is oikos? Why would I want to map it? What do I care? All of these questions will be answered below in the first half. In the second half I’ll give you a fictional oikos map along with some of my notes that should help us ask the right kinds of questions of our own maps. I hope you enjoy making your own map and may it be a blessing not only to you but to your entire oikos! 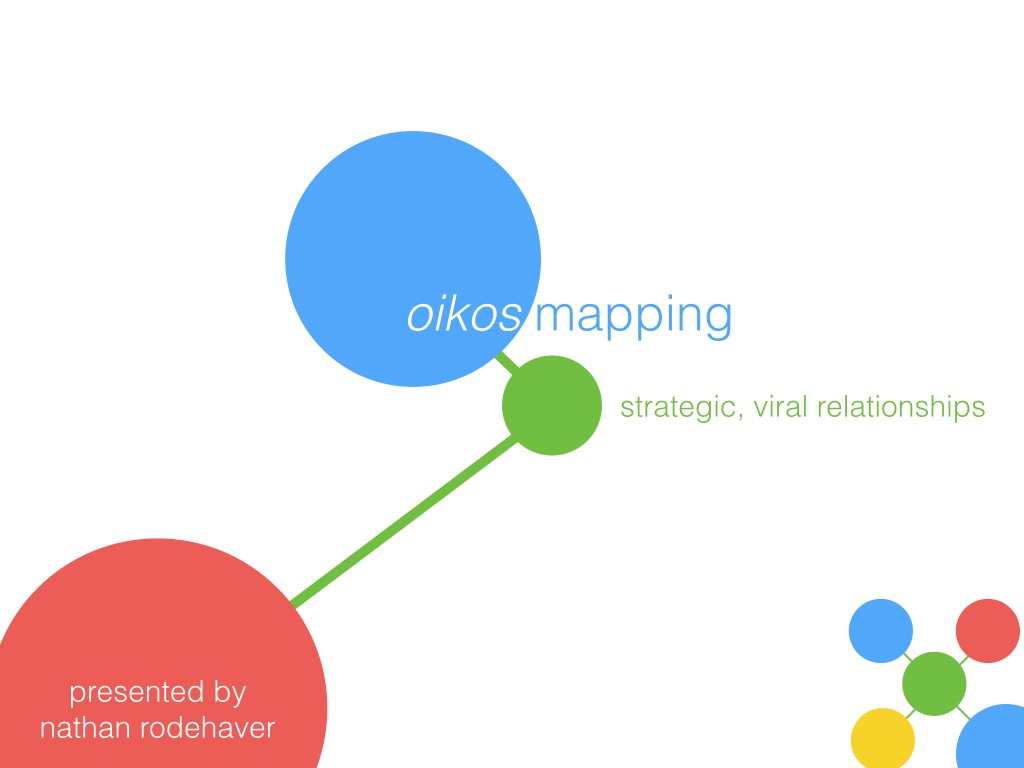 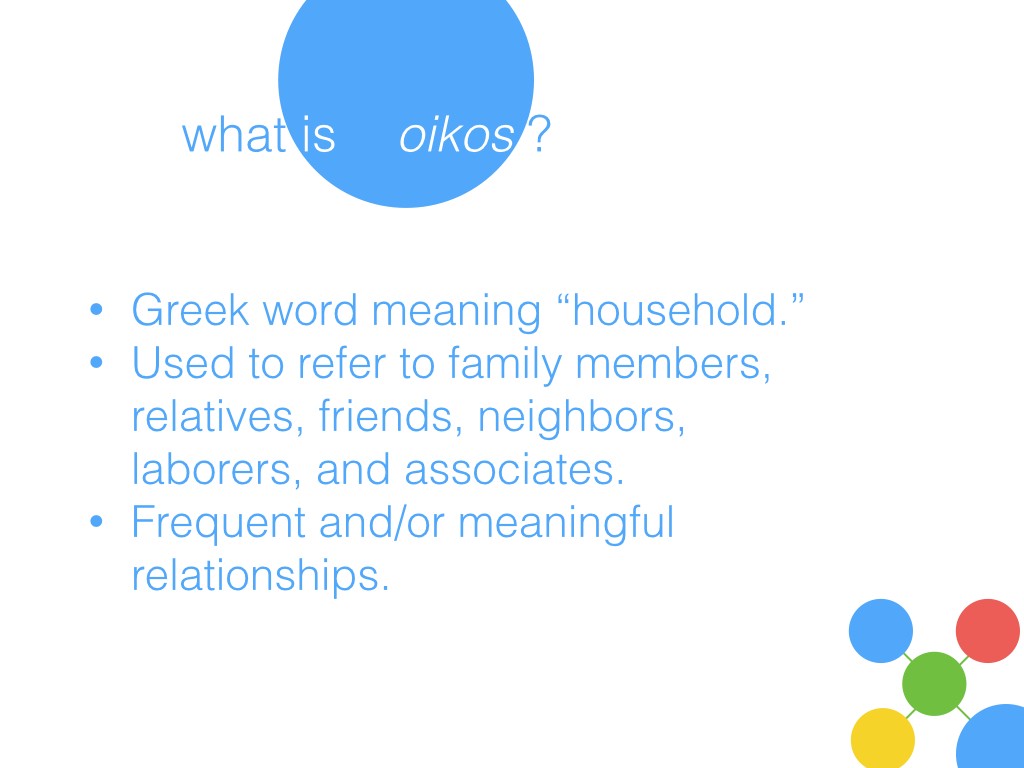 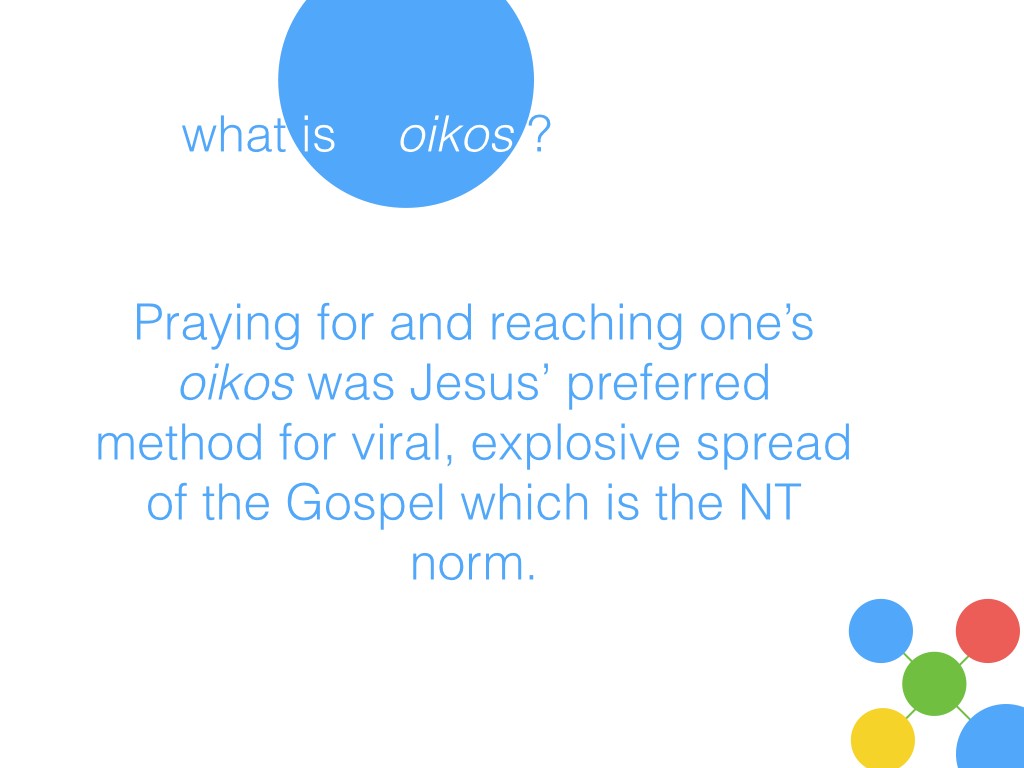 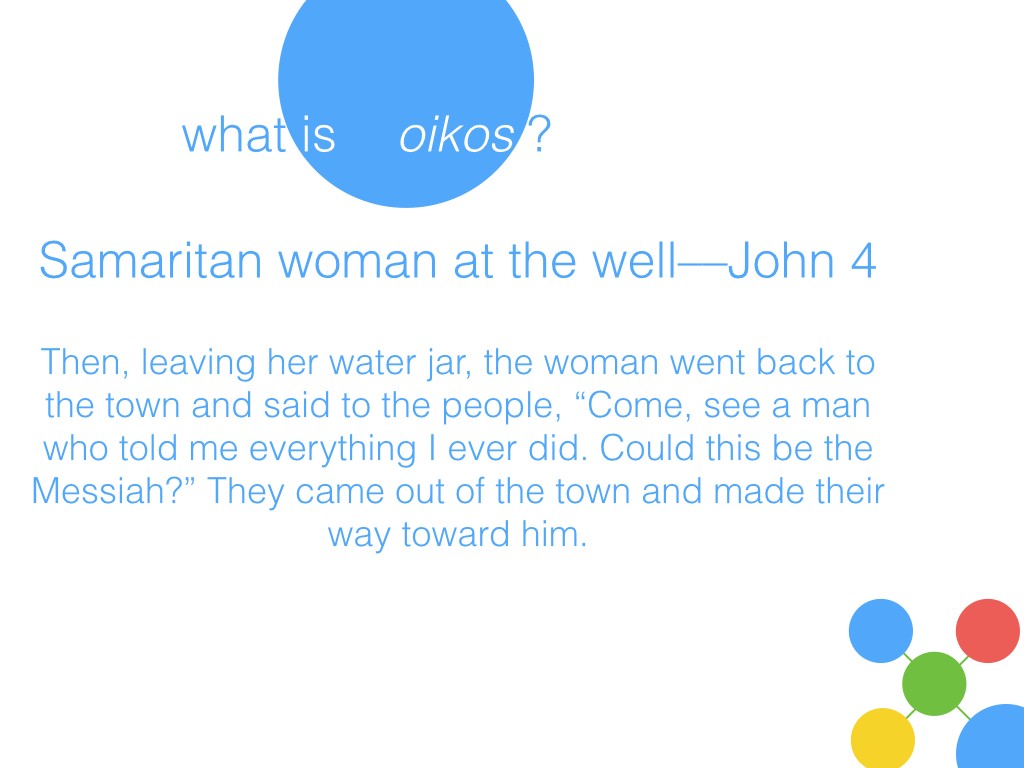 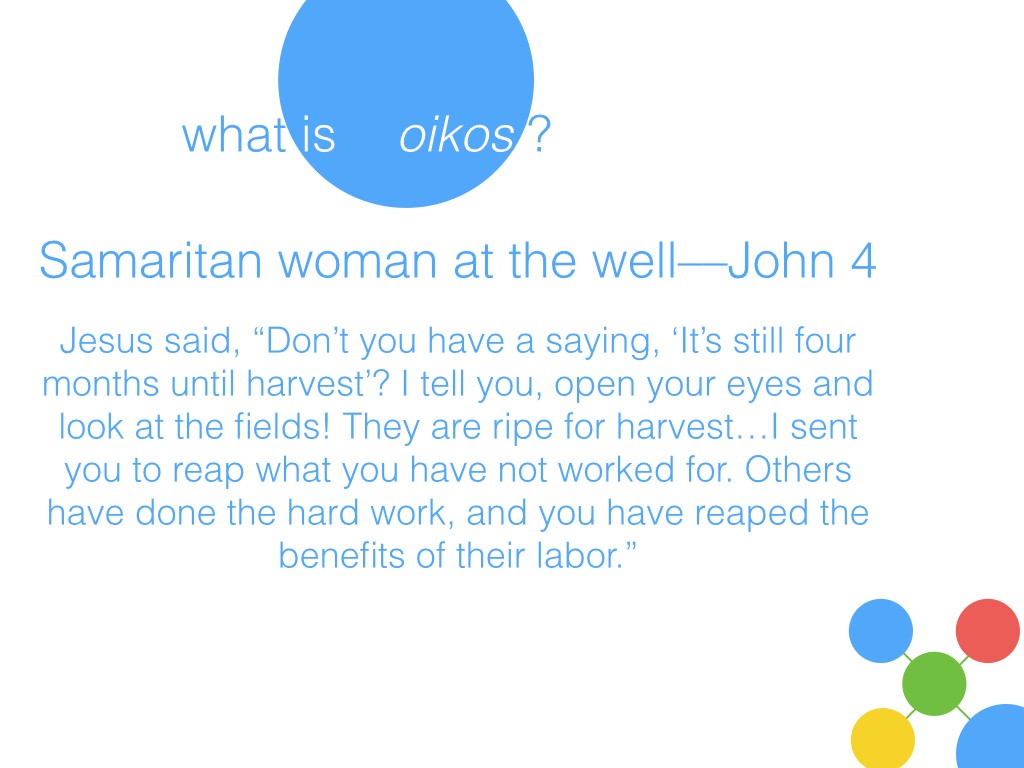 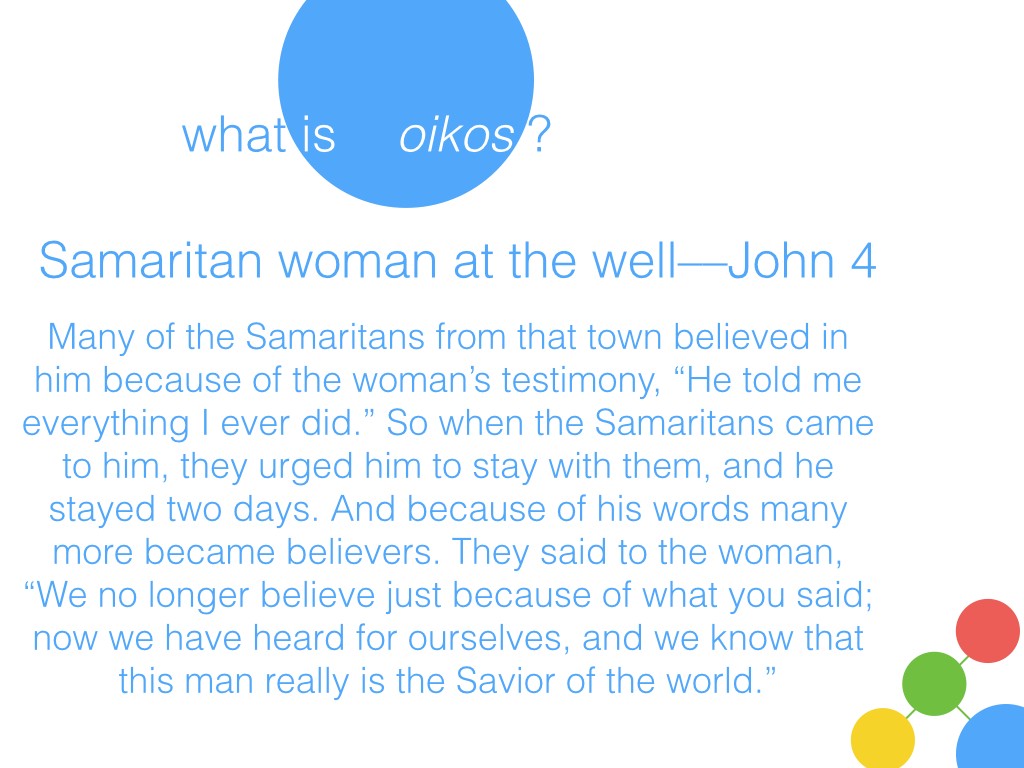 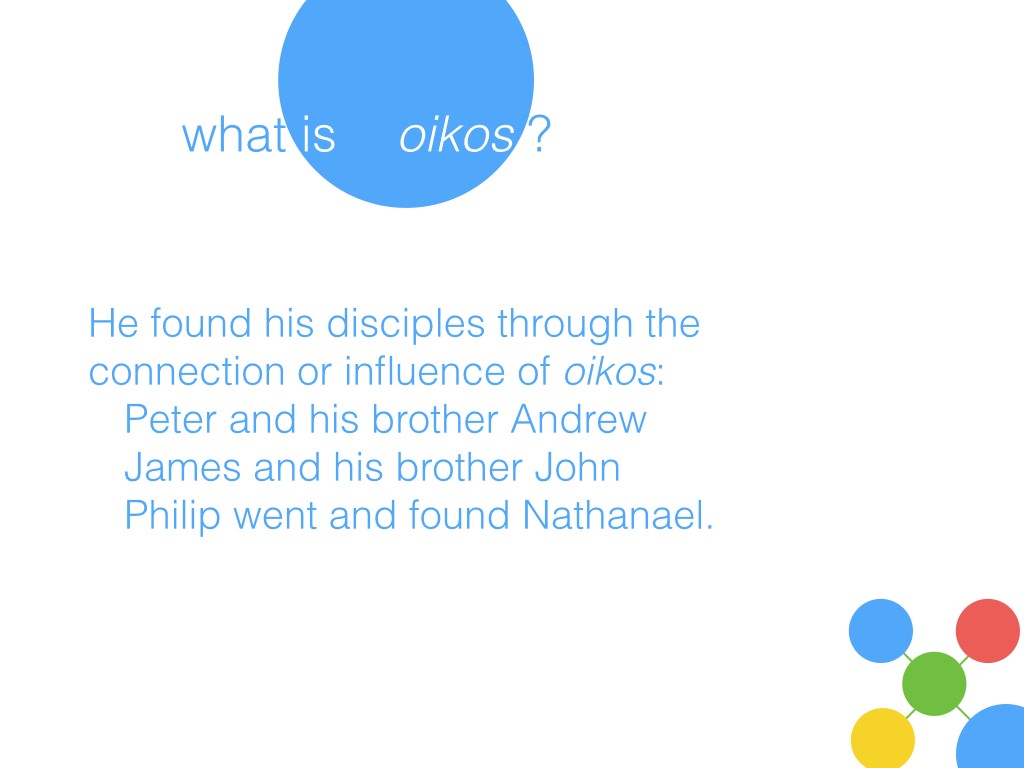 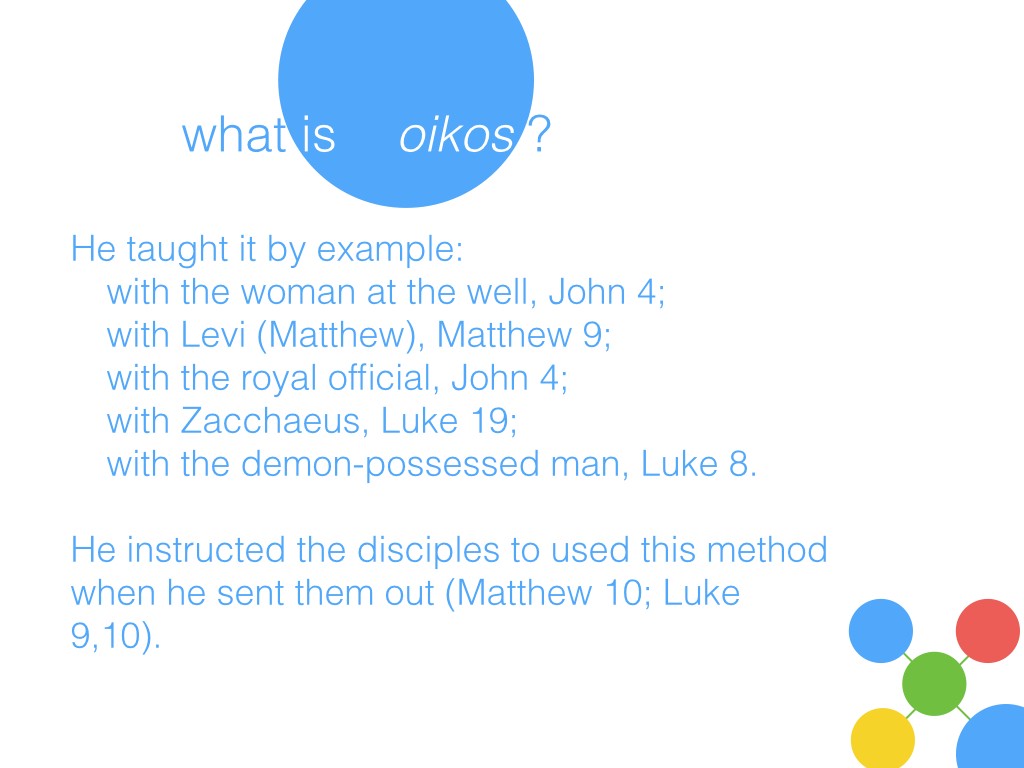 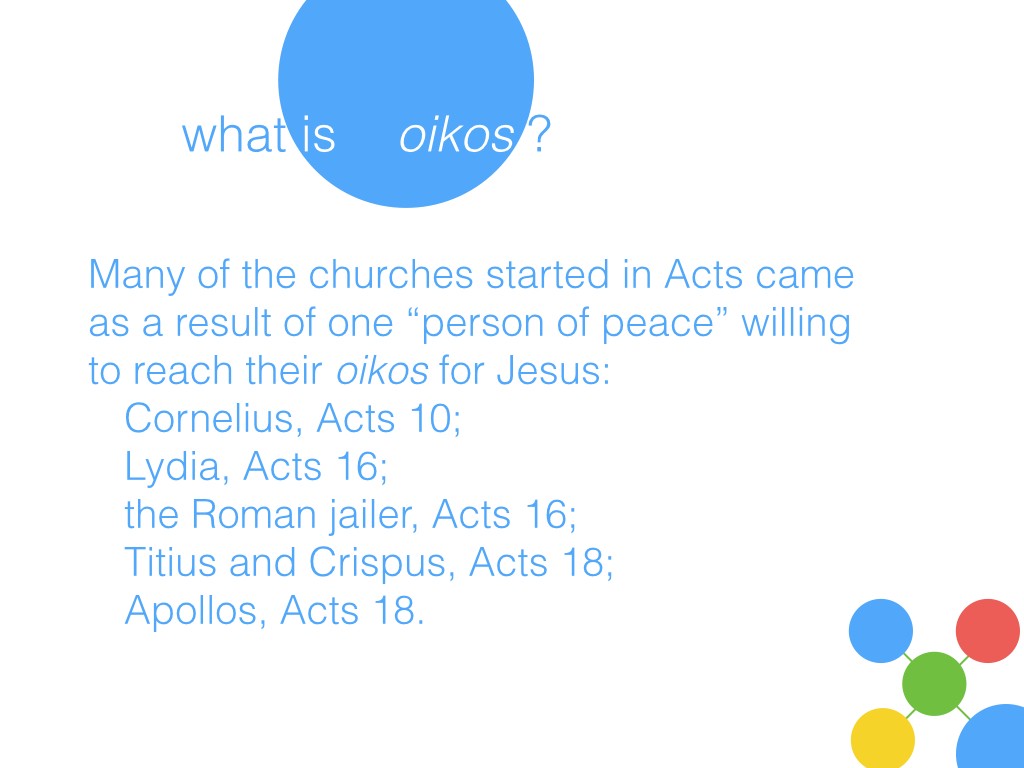 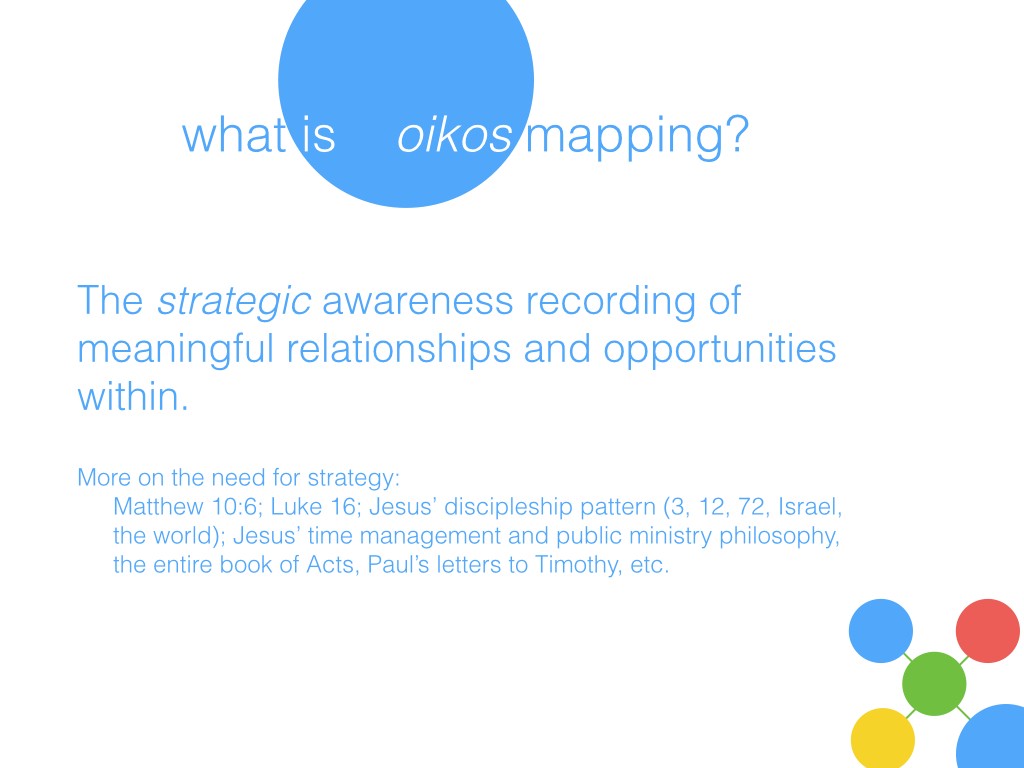 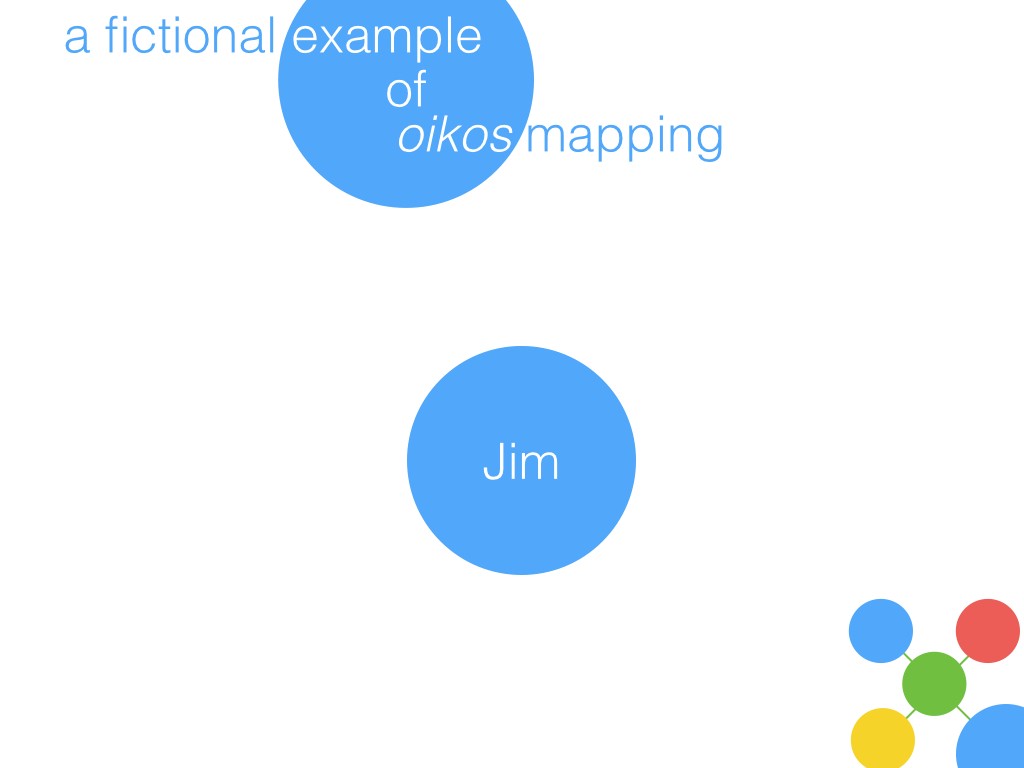 And now for our fictional example of oikos mapping. Meet Jim. Everyone say, “hi, Jim.” … No? Ok. 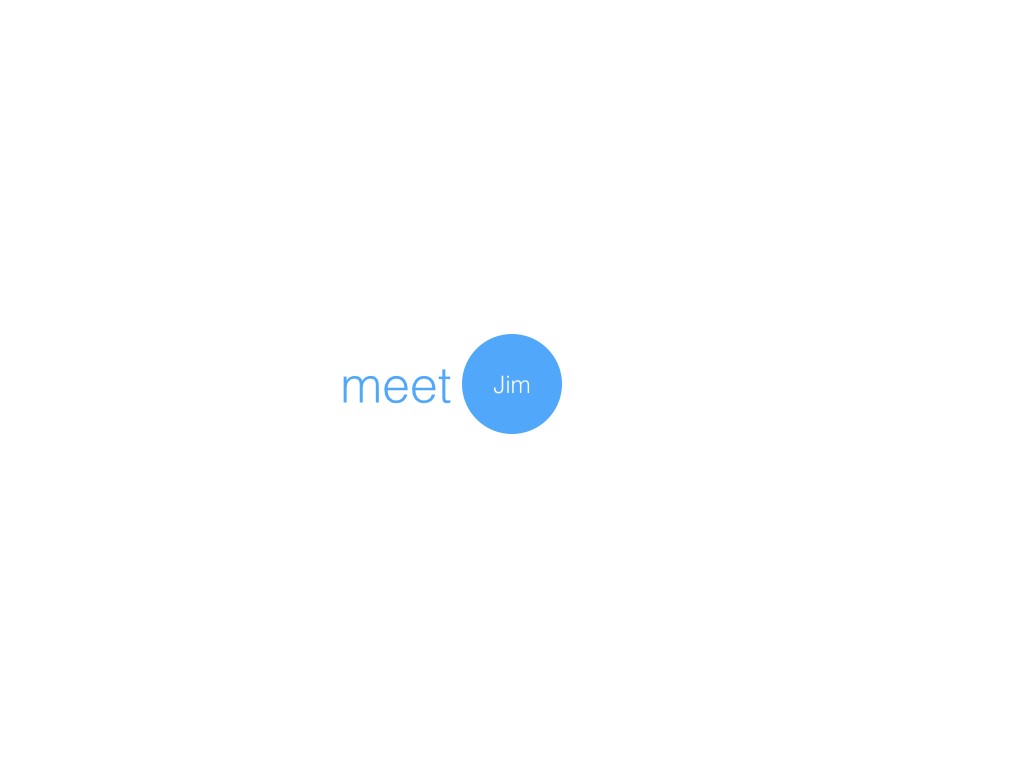 Jim begins his oikos map by choosing four colors. These colors all indicate something different. He needs one color for each: places he goes, Christian, nonChristian, and unknown. He isn’t making a value judgement, but rather he’s making himself aware of what kind of relationship the people in his life have with Jesus. Jim uses blue to denote a person of Christian faith and practice, red for nonChristian (either pre– or postChristian), and yellow for anyone of whom he really has no idea. He may not know them that well, or it may be ambiguous. He puts his name in the center, not because he’s selfish and the world revolves around him, but because the people and places that get listed here all have one thing in common: Jim.

He chooses green to denote all the places he goes every single week, including his family, neighborhood, place of work, his church, and any other “third location” (wherever is not home and work). All this is seen in this next image. He lists his wife Rachel and son Connor, a neighbor, and a co-worker. 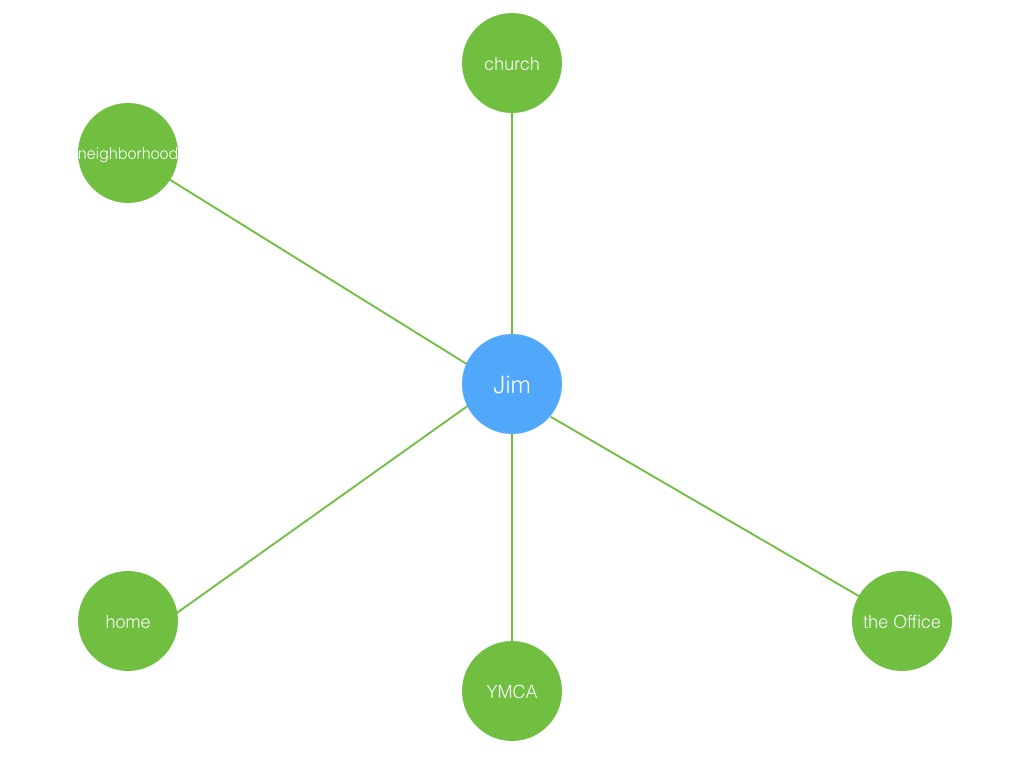 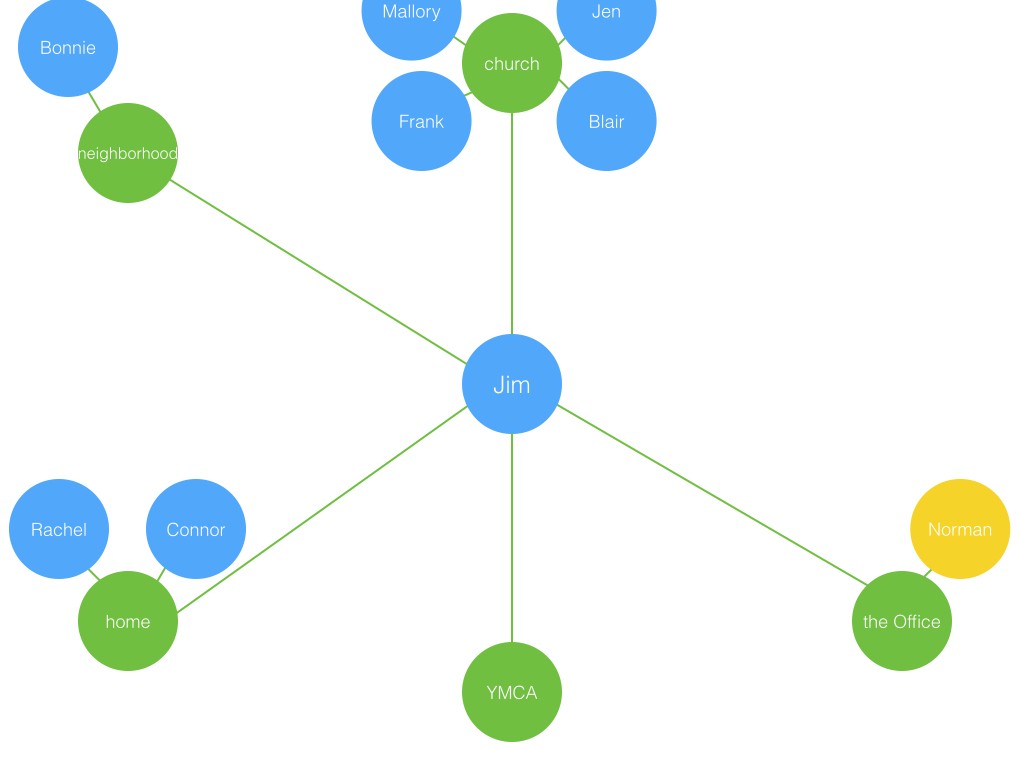 First Time Through the Exercise of Oikos Mapping:

Jim begins to add some names to his map. Then he gets to his church and begins to notice something. Let’s zoom out to see what he sees. 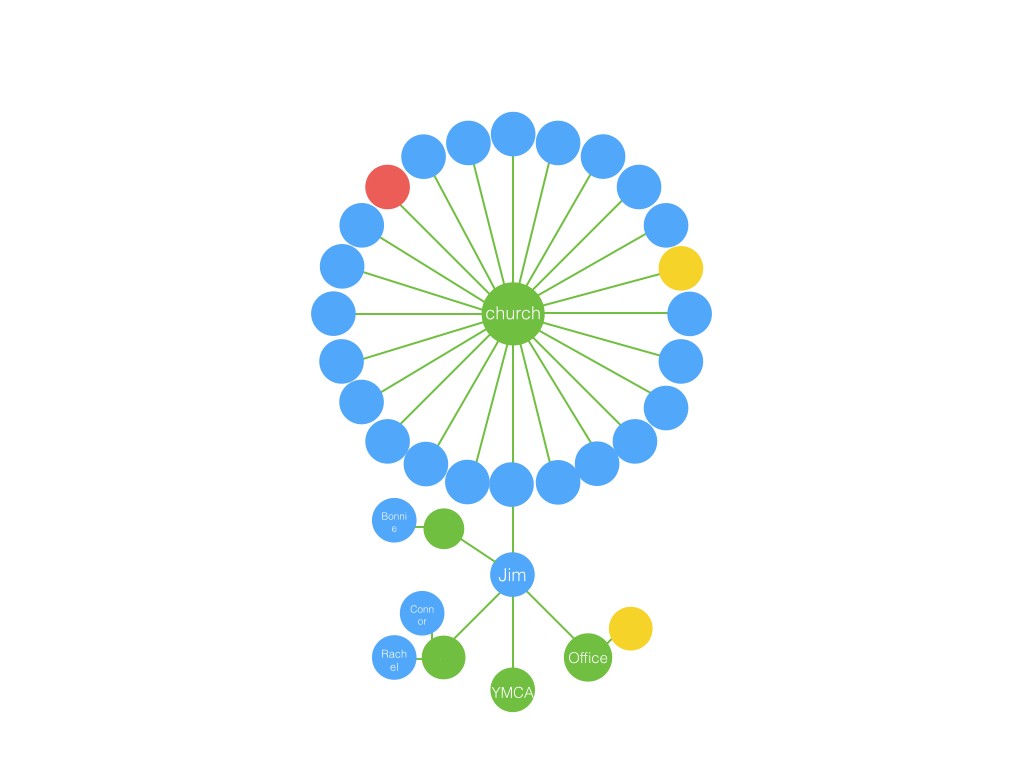 He lists the 24 people he connects with every Sunday, even though there are two to three dozen others that attend his church.

Over the next few weeks, he makes three small changes: 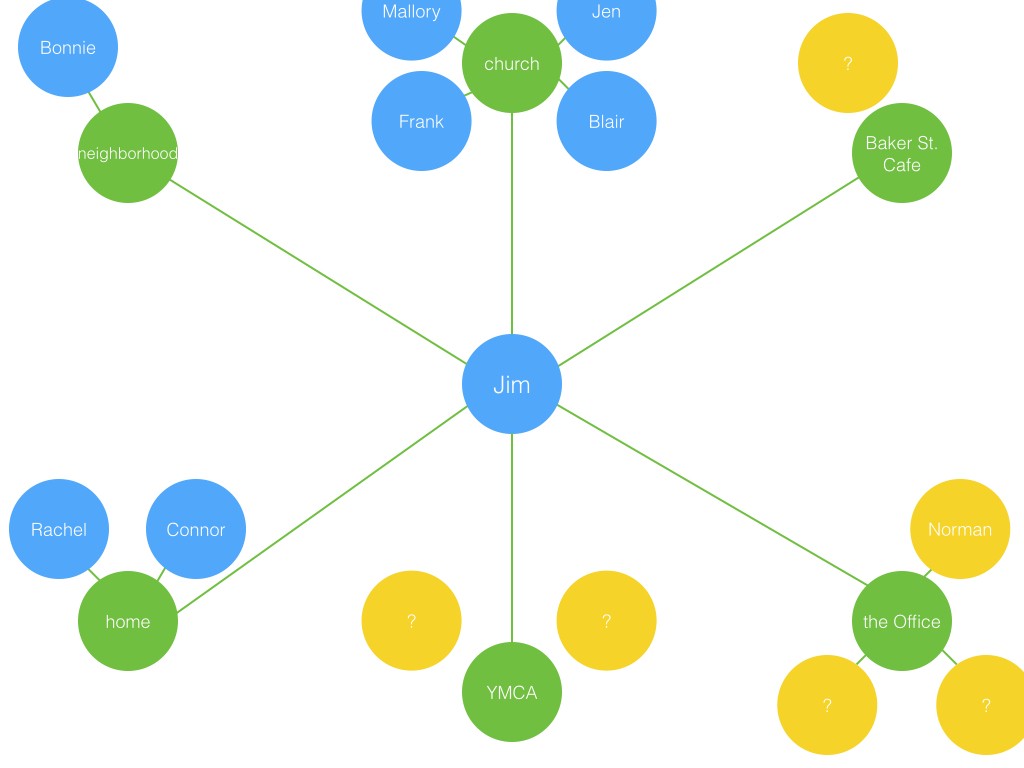 The first week (above image) Jim begins to notice things. Mostly he notices a lot of people he never noticed before. He doesn’t have names yet, but his awareness is growing. 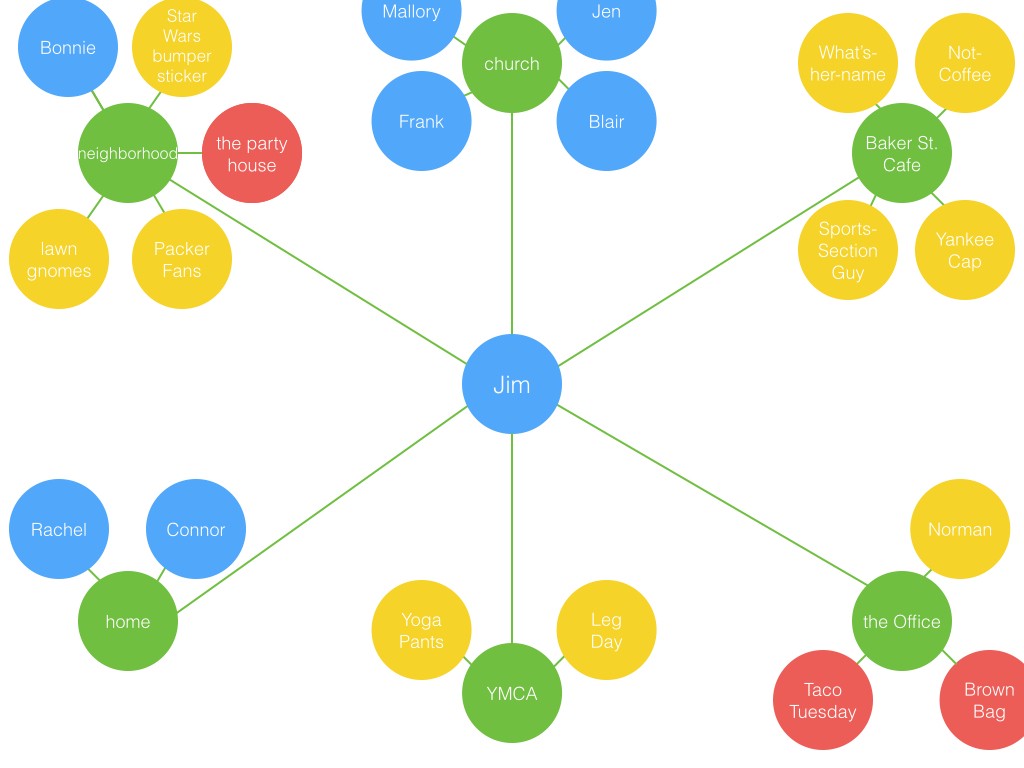 Though he’s starting to recognize familiar faces over the next week and a half at the YMCA and at the coffee shop, around his neighborhood and at work, he wants to put them on his oikos map, but there’s a problem. 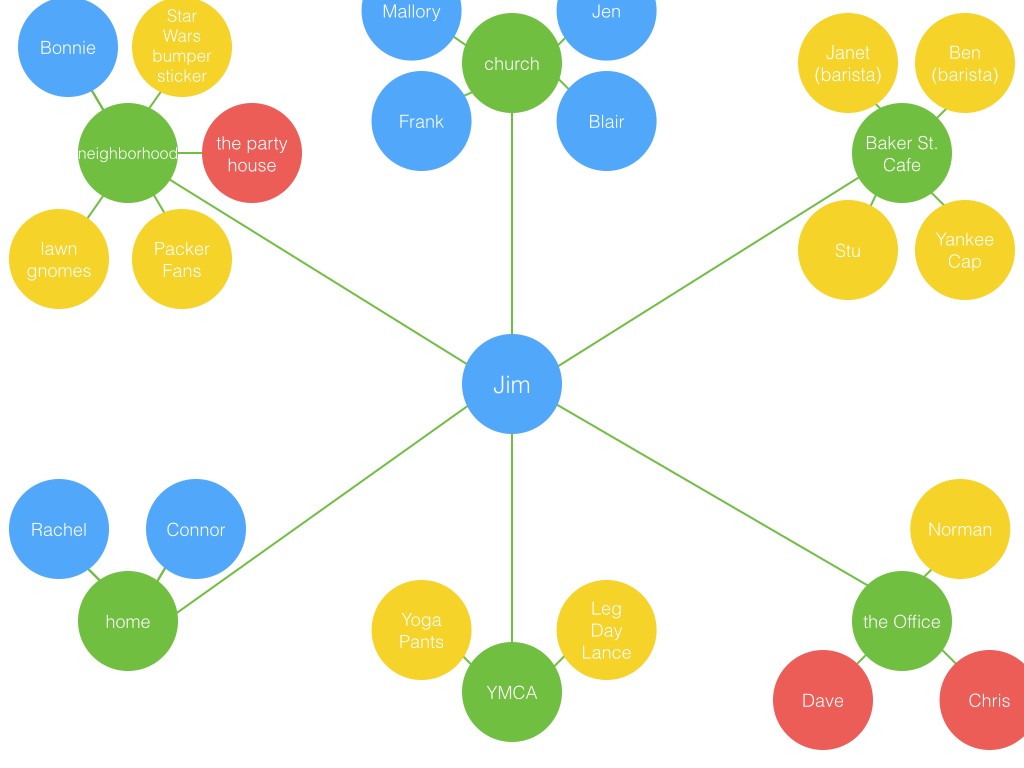 In the normal coming and going of Jim’s week, he begins to pay attention to name tags of waiters, and baristas. He introduces himself to Sports-section guy, whose actual name is Stu. He finds out “Brown Bag” is not the name his parents gave him; it’s Chris. When he learns a name, he puts it on his oikos map and begins to listen better. He remembers details about people’s stories better because these people mean something more to him now. He begins to pray for them multiple times a week. 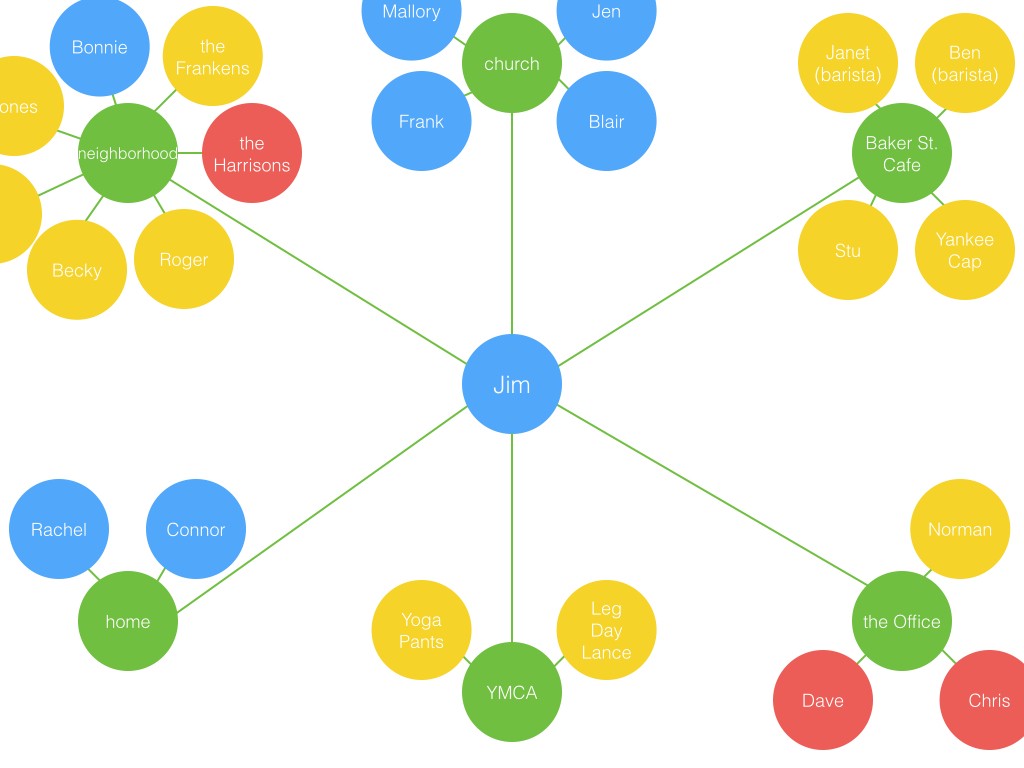 After a few weeks, Jim and his wife Rachel decide to throw a block party; nothing special, just a fire, some hotdogs, s’mores, and cocoa. They make up a flyer and go to their immediate neighbors, introduce themselves (again) and invite them all. Out of eight houses, five come. Jim puts all 8 names on his oikos map and prays for them regularly. 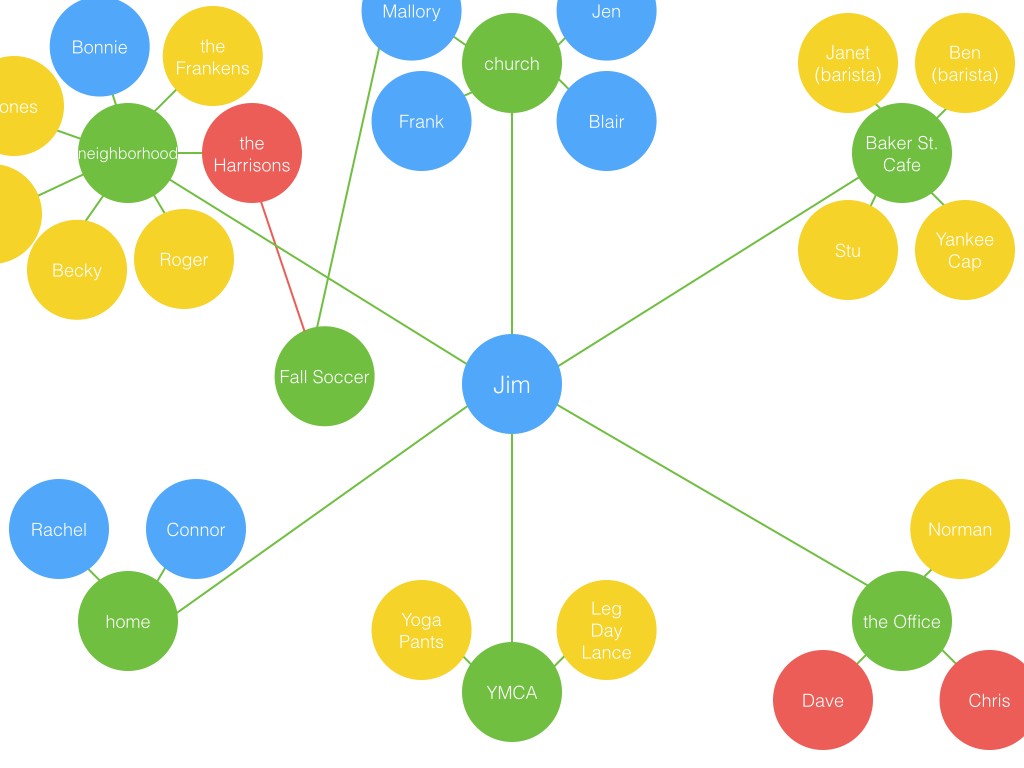 It just so happens that Jim’s neighbor, the younger Harrison boy ends up on a soccer team with the son of a woman from Jim’s church.

Mallory from church can begin to pray for the Harrisons as she intentionally begins to try to move them from stranger to acquaintance to friend. But, Mallory wouldn’t have known that unless she was over at Jim and Rachel’s for a block party (she wasn’t) or Jim is sharing his oikos map with his Christian friends.

The point:  be sure to make connections outside of yourself. Connect neighbors to each other, friends to other friends. AND share your oikos with one another and talk about what your map is telling you. 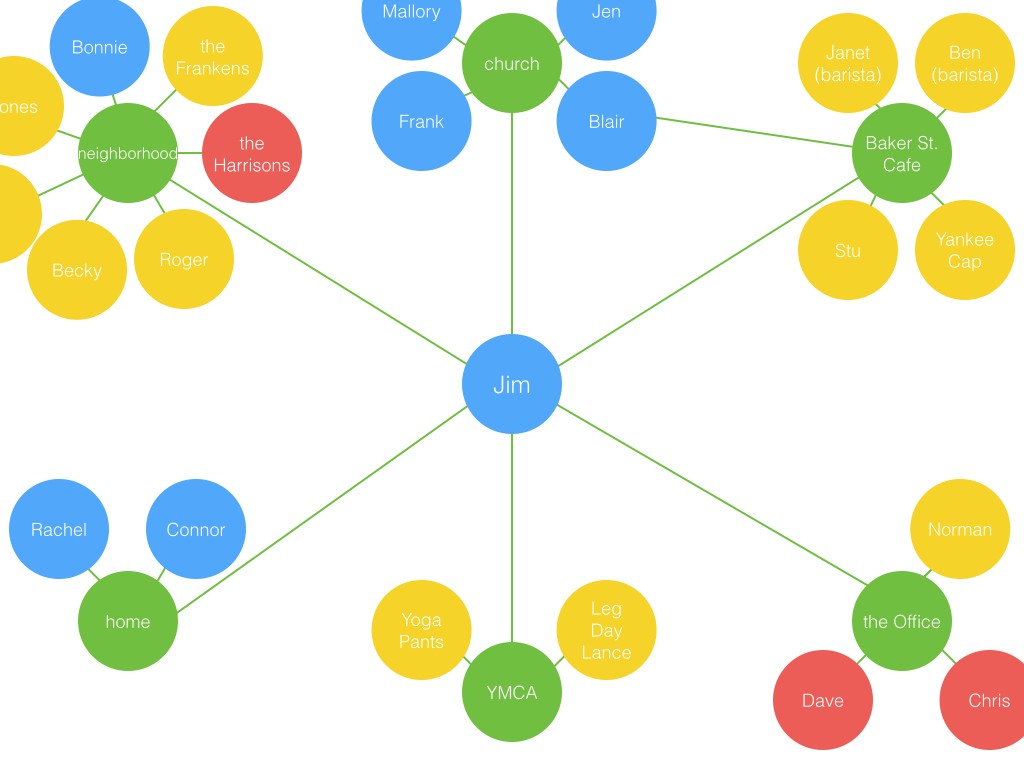 Jim and Blair from his church have been meeting in an Life-Transformation Group and both feel that it’s become too closed. They’re both praying for their oikoses but feel their witness is hindered by their meeting in Blair’s apartment. People they invite feel it’s too weird. Though Blair hasn’t been there, they begin to meet at Baker St. Cafe for their LTG. Both begin to pray for the staff and regular customers. 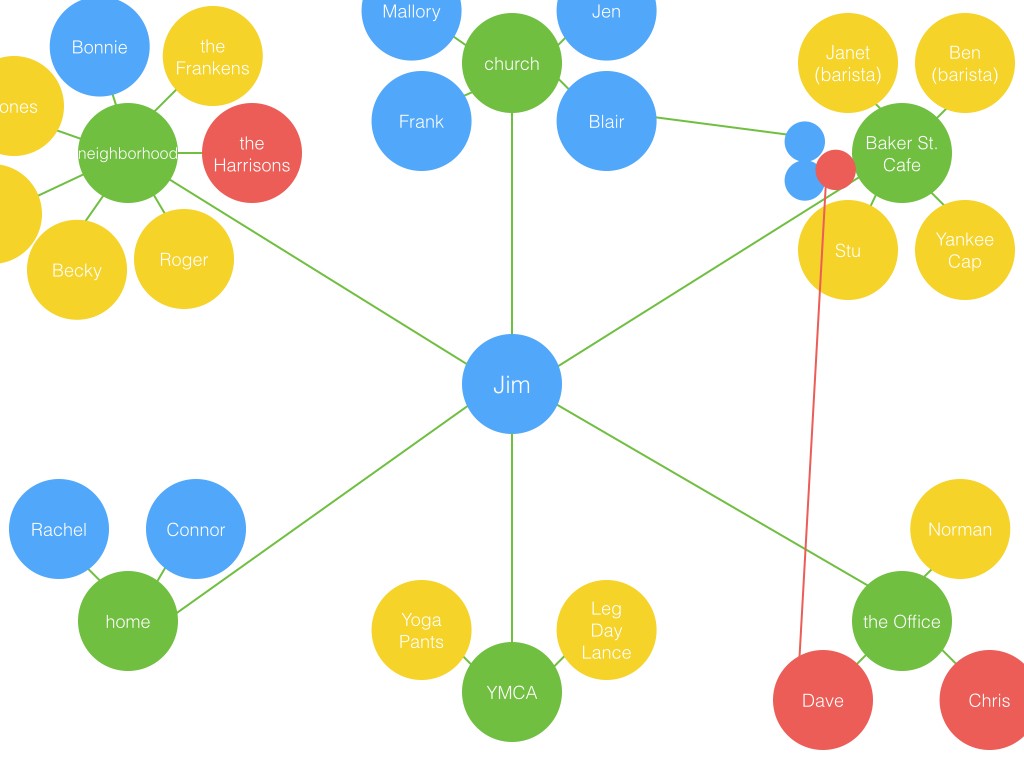 One day Dave from work responds to Jim’s invitation to give his opinion on the Bible so Dave joins them every week at the cafe. All three of them begin to pray for Ben, Janet the barista, and Stu; even Yankee Cap.

What is Jim’s map telling him right now? What is happening at Baker St. Cafe?

An non-viral form of discipleship. If they continue to simply add people to this group, intimacy and accountability diminish above the third or fourth member, personal growth slows to a crawl, and the future of this group has been given an expiration date. The chances of this group reproducing are poor.

But, we want viral growth; multiplication, not addition. If they’re doing it right, the Baker St. Life-Transformation Group will get to celebrate sending a missionary to start a new LTG, with either someone Blair or Dave will be praying intensely for and invite to read the Bible and talk about it. Three is good, but at four members the group is “pregnant” and should expect to multiply soon: two groups of two, whose influence into two different places in town multiplies. 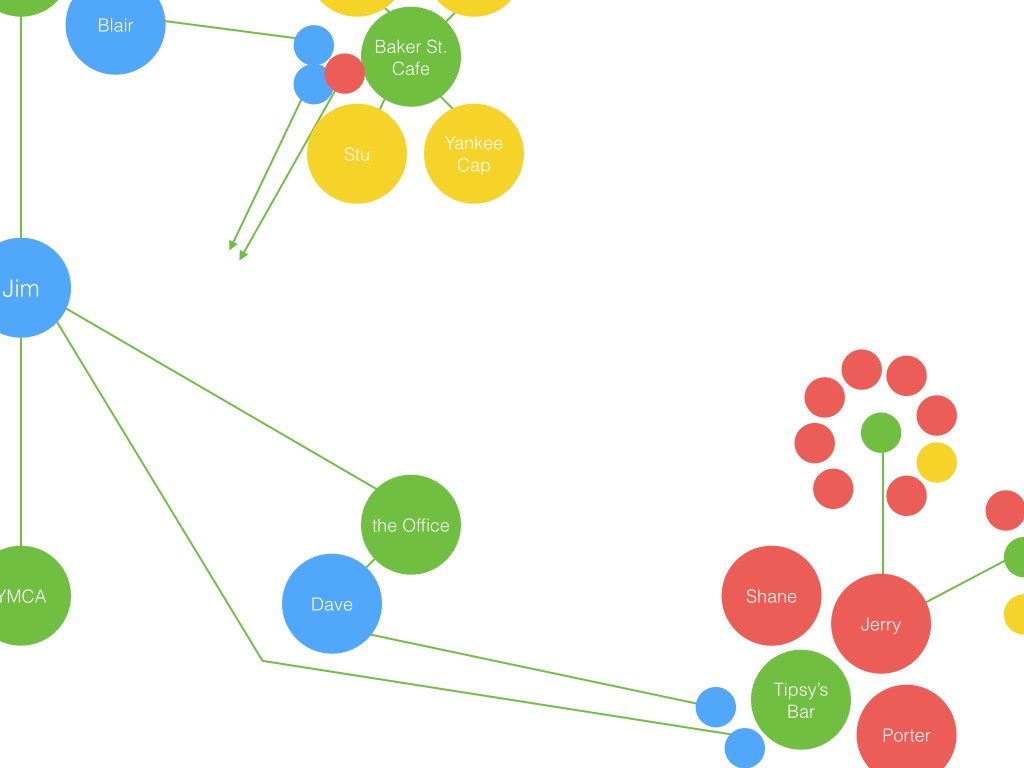 After reading the book of Matthew four times in one month, Dave connects to Jesus in a way he never has before. He never connected what Jesus said or did with his own life. He begins to have a genuine relationship with Jesus, and Jim baptizes Dave at his church one Sunday.

But instead of asking Dave to stop going to the bar on Fridays, Jim might go with him and start a brand new LTG at Tipsy’s. And this is a huge blessing for Dave’s buddy, Jerry who is having marriage trouble and is ready to make a change but he doesn’t know any Christians. But, Jerry does know a whole lot of people who are ready to hear about the love, forgiveness, hope, and transformation of Jesus. His oikos is rich and ripe!

This is just one way the Baker St. ministry might multiply themselves. Then Blair finds that he has another hour of his week opened up to ministry and decides to start meeting with Ben, one of the baristas, who has begun to be curious about what Jim, Dave, and Blair do there every week with those Bibles. 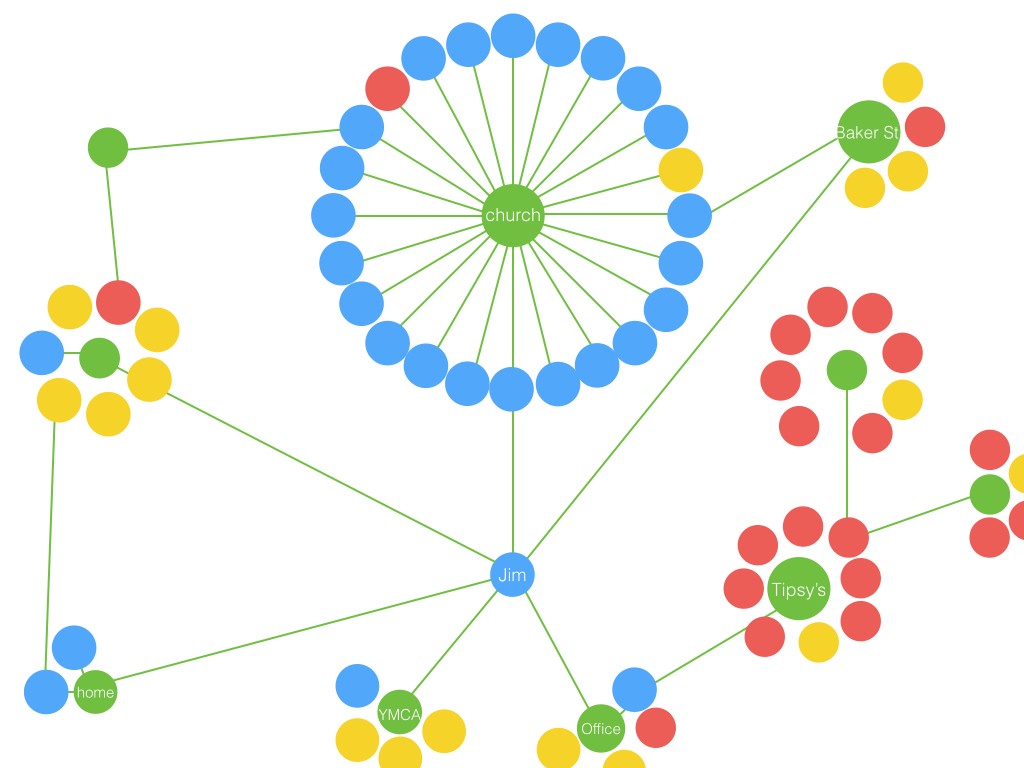 This is Jim’s oikos map after a couple months. Jim never puts his map away and always asks at least once a week, “what is my oikos map telling me?” In this way, the map has become three powerful tools as listed below. 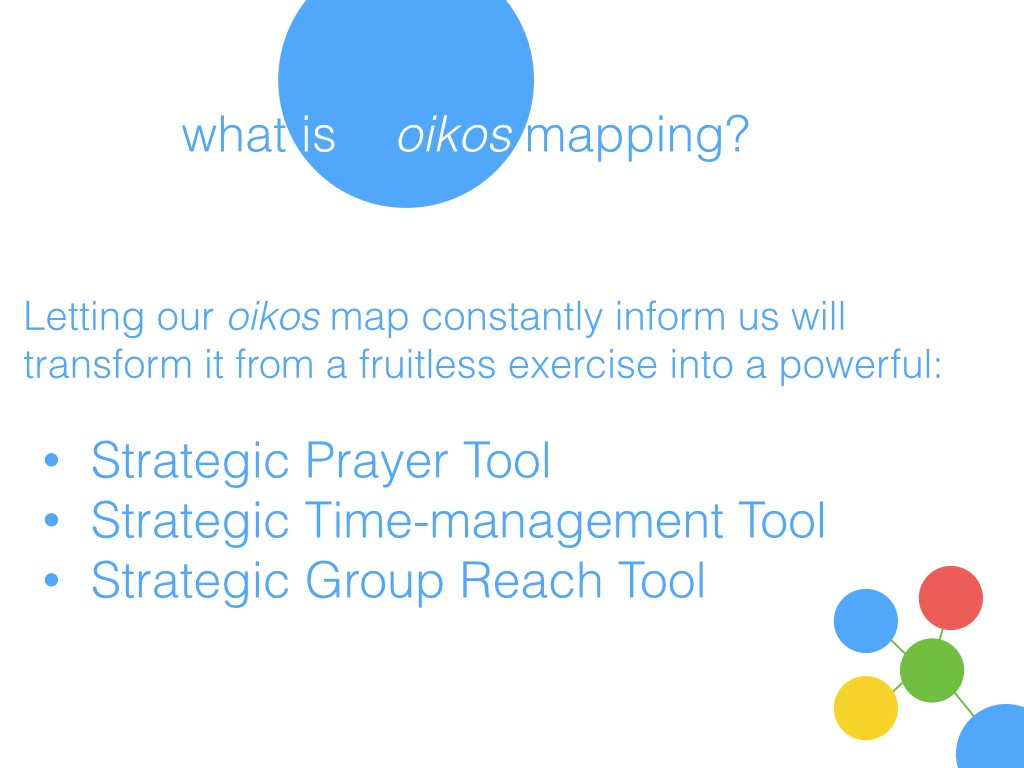 May God help you see a receptive person in your oikos. May he lead you to a person with a rich and ripe oikos. And may your map become a story of God’s grace and blessing in the lives of everyone you know.